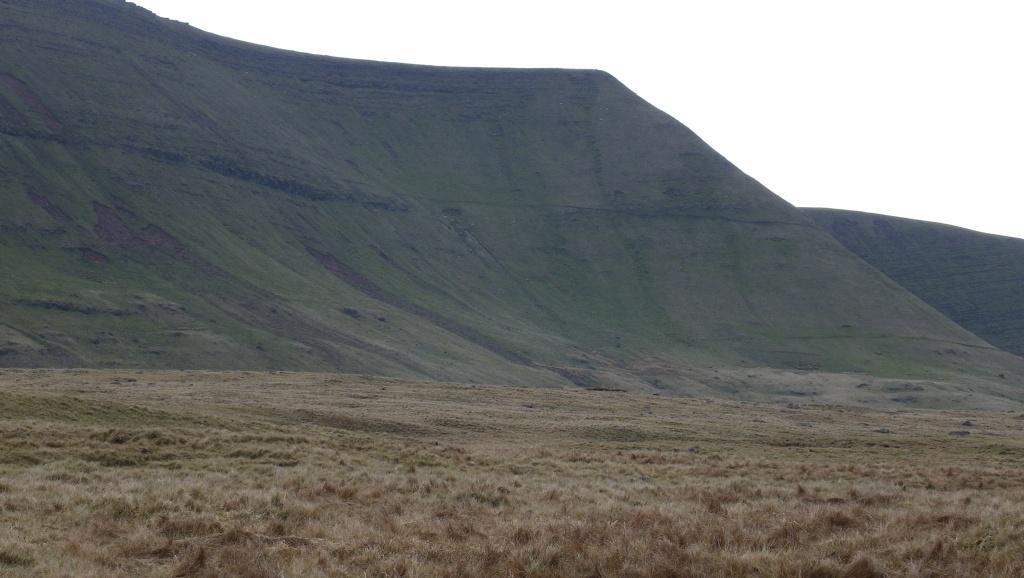 This is a dramatic looking bit of mountainside. You are now nearing the end of the circular anti-clockwise walk, and will curve around this mountainside, before descending the steep track down to the caving club.

To your right will be a view of the track you walked along earlier, a mile to your right down the hill. If you look carefully you will make out the bridged causeway that you walked along an hour or so earlier. At this point in the walk you are actually only 20 minutes or so from the car.

On 29 July 1862, an Act of Parliament created the Dulais Valley Mineral Railway, to transport goods to the docks at Briton Ferry, Neath built by Isambard Kingdom Brunel.

The population of Penwyllt grew on this increased transport route to 500 citizens (1881 Census).

The passenger station at Craig-y-nos/Penwyllt was in part funded by opera singer Adelina Patti, who lived at and extended Craig-y-Nos Castle. She built the road from the castle to the station, and a separate waiting room. The railway supplied her in return with her own railway carriage, which she could request to go anywhere within the United Kingdom. A gun would be fired when she arrived at Penwyllt, to signal the coach and horses to come up from the castle and collect her.

Penwyllt was created on the back of the industrialisation of the Swansea valley. However the industry here was mostly all manual labour and became uneconomic. Penwyllt declined as industrial processes became more automated, shifting instead, on a much larger scale, to Port Talbot.

Penwyllt was in decline from 1900, but World War II created the final closure. The Penwyllt Inn closed in 1948, and the line north of Craig-y-nos/Penwyllt station closed. By 1960 the population fell to 20 people. The railway line remained open south to Neath until 1977 to serve the quarry until it closed.

Many former industrial buildings, commercial properties and houses of Penwyllt were demolished in the 1980s, as they were beyond economic repair. The former pub survives as private accommodation for cavers. The former Craig-y-nos/Penwyllt station was apparently once used as a private holiday cottage though I have not seen it used as such for years; it was recently re-roofed but inside it looks abandoned.

The only group of terrace houses still occupied are in Powell Street - now the headquarters of the South Wales Caving Club, and the South & Mid Wales Cave Rescue Team.

The quarry, though not the railway, re-opened in 2007 to provide limestone for the works associated with the new gas pipeline being laid through South Wales. In 2008 it was again dormant. In 2009 it was operational but at a relatively low level of activity. It has now appeared to close completely though there are still some signs around saying "working quarry"!