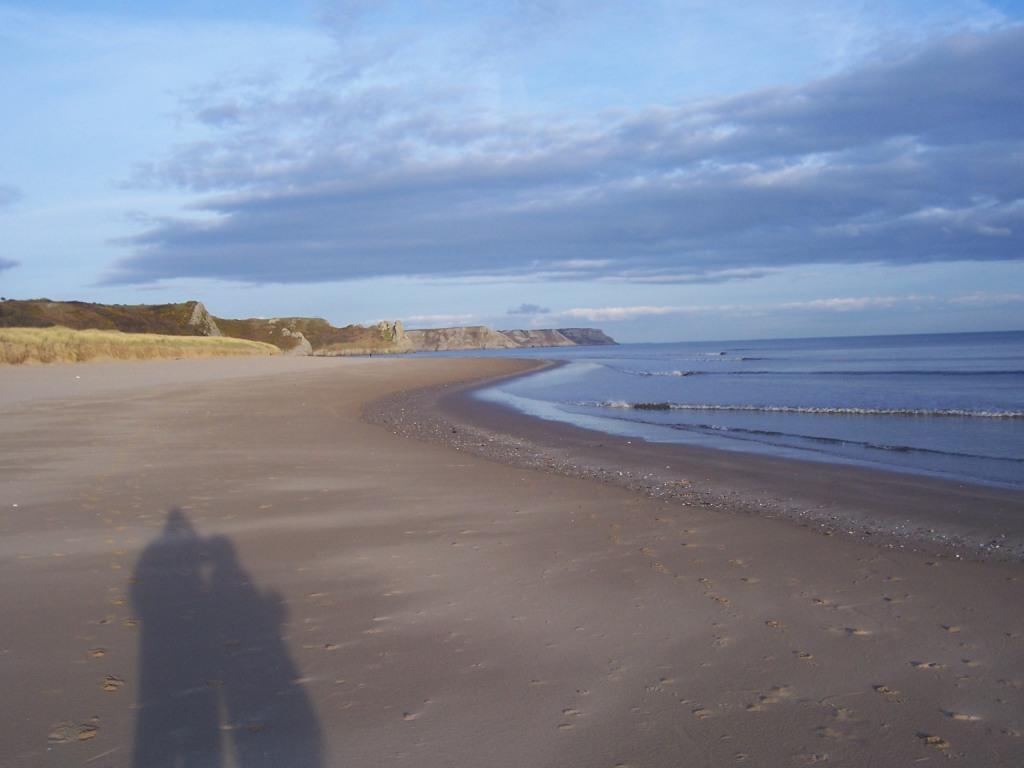 "Almost hidden from view, beneath the glooming shadows of the woods neighbouring Oxwich Bay, nestles the church of St. Illtyd's. (This is on the woodland walk to Port Eynon leading off from Oxwich Bay Hotel).

Reputedly, a Christian building has been present on this site since the 6th century, but the current building is a largely 13th century construction with a 14th century tower.

The interior of the church contains monuments from the 13th and 14th centuries, most notably the De La Mere family effigies, made from local sand and plaster, in a recess locally know as 'Doolamur's Hole'.

It is said that the depicted armed Knight and his Lady represent two members of the De La Mere family who owned Oxwich Castle and tragically drowned in Oxwich Bay in the early 14th century. However, some historians have argued that the style of the Knight's armour is distinctly 15th century, suggesting that the effigies are of Sir John Penres and his wife Margaret Fleming, who held the manor of Oxwich at the time.

The chancel is the oldest part of the church and indeed the smallest in Gower. Some speculate that this may in fact be the original 6th century Celtic cell, but there is little evidence to support this viewpoint. The ancient font is believed to have been personally placed in the church by the Celtic Saint, St Illtyd, to whom the church is dedicated.

The bell, housed in the tower, dates back to the 14th century. It bears an inscription comparable to one of Rhossili's church bells: "Sancta Maria ora pro nobis" meaning 'Pray for us St. Mary'.

The bell was recast in 1892 during a church restoration programme costing £1,000 and financed by Miss Emily Talbot of Penrice Castle. The outer walls to the church were largely left untouched except for the addition of two windows in the nave and one in the chancel. New drains were cut to remedy the damp rising from the vaults and a new roof and flooring was laid throughout. A vestry was added to the south side of the chancel.

The upper churchyard possesses an easily overlooked well that has long since dried up. However, in the past, locals believed the well to be haunted. On one occasion a ghostly white horse called a 'ceffyl dwr' or water horse in Welsh folklore, was seen in the churchyard before it seemingly vanished into the waters of the well.

Towards the rear of the churchyard lays the final resting place of a Royal Navy soldier, "known unto God", whose body was discovered washed ashore on Oxwich Bay during the first World War.