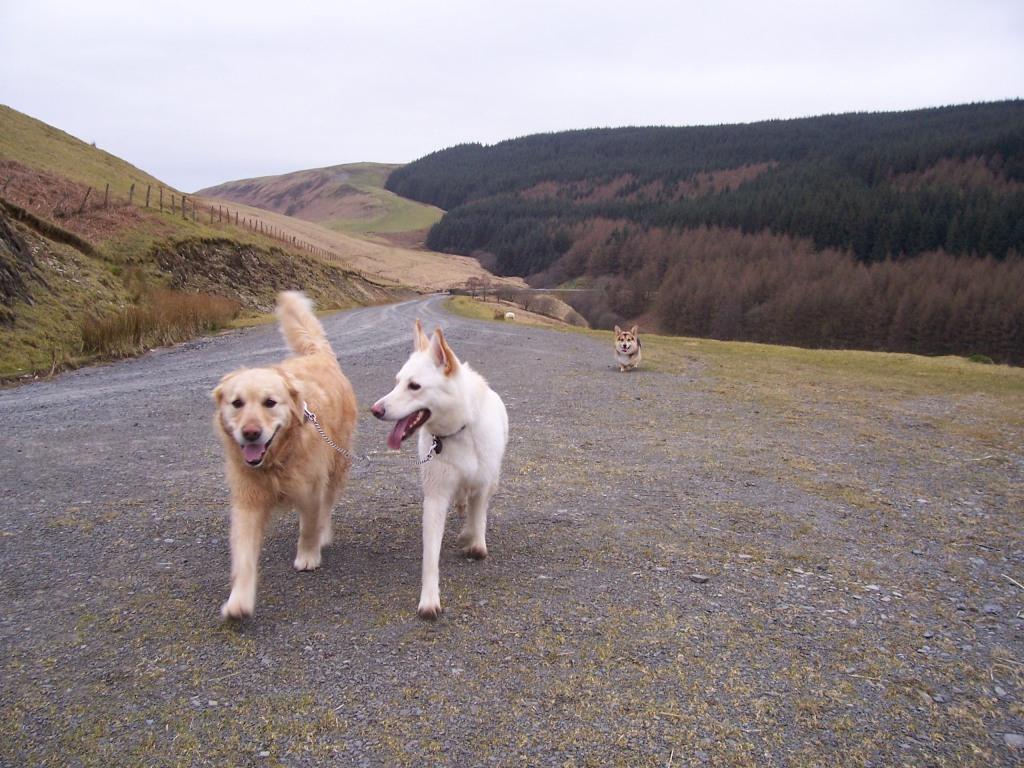 As we walked along on the outward bound journey of this track, we found some sheep had escaped their mountain grazing areas. As Jack won't chase Sheep but Sheeba, if she gets out of my line of sight, will seize the opportunity if she thinks I am not watching her, I used to link the two dogs together as shown above.

This practice is not recommended however, as if either dog is aggressive to the other, serious injury could be caused as neither can get away from the other. My mother would never chance this with her Rhodesian Ridgebacks, who most likely would get themselves in a tangle and being a gangly breed with a lolloping bouncy gate, they might even break a leg or jump up and twist a neck.

Also if there are other pedestrians around, two loose dogs running either side of someone will knock them over.

However I have found Sheeba and Jack are fine when they are attached. They are both low to the ground, Jack is not very excitable, so it works for them. In very remote areas where you might get sheep but no people, and you want to let the dogs have a free run, this worked very well but I would not do it in an area with other walkers around!

I find it is when they are separate that Sheeba bullies Jack by chasing him if he runs off, effectively preventing Jack from taking the lead.

This prevention of any other dog getting in front is a habit with an insecure dog that wants to dominate the pack; they make sure only they are in the lead. Consequently Sheeba nowadays is generally muzzled to prevent her nipping Jack or indeed any other dog she might come across, which she will do if she is out of my line of sight or my attention is taken away in conversation with someone. I cannot be 'watching her' all the time, so Jack as the father figure plodding along prevents Sheeba from charging off in chase.

Should I spot Sheeba chasing off, and I call her, she will always break off the chase and come back, which is not something that can be said of many dogs. Many owners keep their dogs on the lead so much that they have no freedom and no response to the 'call' command when it is needed.