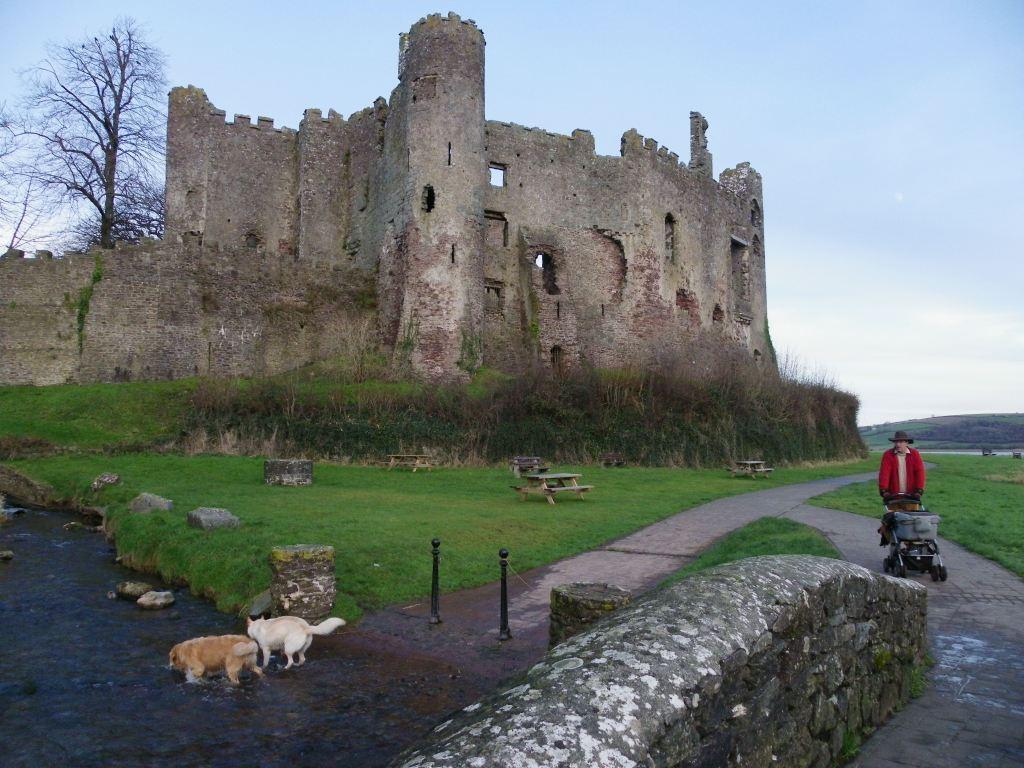 At the end of the 13th century, the defences were strengthened.

A forward projecting gatehouse was built against the earlier, simple entrance into the inner ward.

A new round tower with deep spurs was built at the south-west corner of the inner ward and the defences of the outer ward, including the outer gatehouse, were rebuilt in stone.

The castle was originally constructed in red sandstone, but in the mid-14th century Guy de Brian VII used for his building a distinctive green stone, which is quite easy to detect.

The whole south-western corner of the inner ward, including the round tower and the inner gatehouse, was considerably heightened. This building phase is particularly clear on the outside of the castle, where the green stone heightening can easily be distinguished from the older masonry on the south-west tower and adjacent curtain wall.

Sir John Perrot altered this medieval castle by converting it into a substantial Tudor mansion. The old hall against the south curtain was remodelled and the curtain wall heightened with mock battlements.

Additional Tudor buildings extended around the south and east of the inner ward and, on the north, the curtain wall between the two towers was demolished and replaced by a large rectangular accommodation block. Its upper floors were reached by a splendid projecting semicircular stair tower.

The inner gatehouse was made more impressive by being considerably raised to its present height and gardens were laid out in the outer ward.

During the Civil War, Laugharne was captured by Royalists in 1644, but was quickly re-taken by besieging Roundheads. The castle was partially destroyed soon afterwards and gradually fell into decay. It was left as a romantic ruin during the 18th century and at the turn of the 19th century the outer ward was laid with formal gardens.

The gazebo overlooking the estuary was used in the 1930s and 40s by the author Richard Hughes, who leased Castle House during this period.