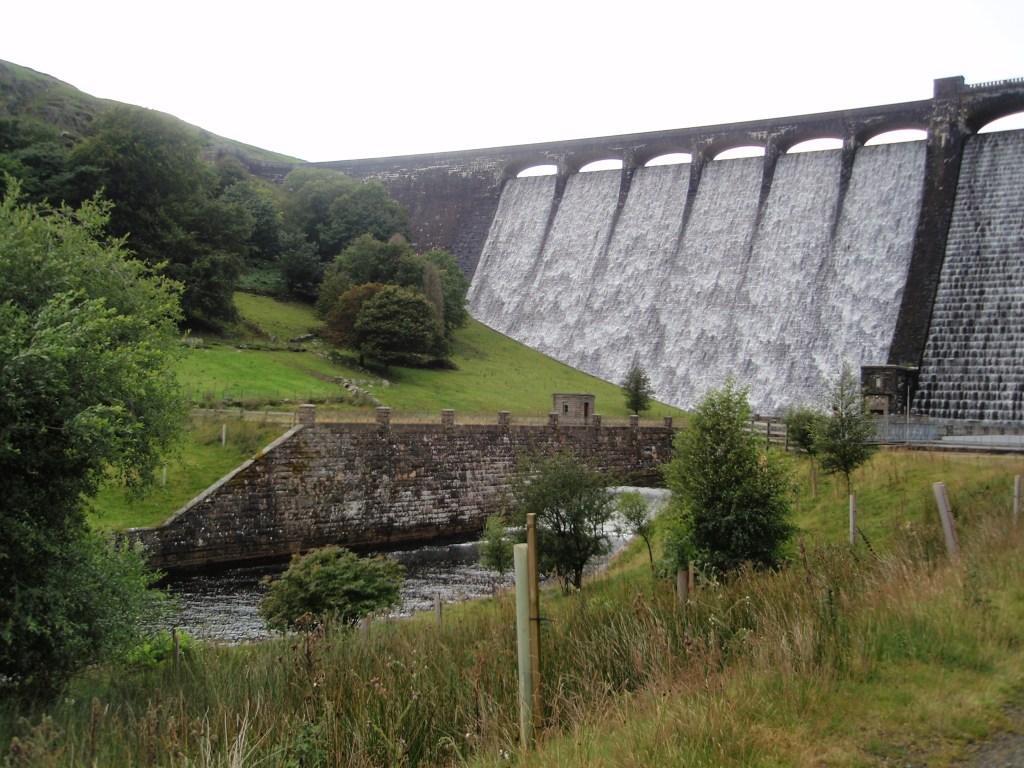 The three dams were proposed for the Claerwen Valley 45 years before the drought, as part of the original Elan Valley waterworks scheme of 1892. Yet they had not yet been built, aside from the base of the dam at Dol-y-Mynach. This was constructed early because of its location below the top water level of the Craig Goch reservoir.

The Nant-y-Gro dam and a small tributary of the River Elan, which joined it about half a mile upstream from the Caban Coch dam site, was to earn a place in the story of one of the most famous episodes of the Second World War, the Dambusters Raid of 1943.

The small masonry dam was built across the Nant-y-Gro stream in the early stages of the construction of the dams and reservoirs in the Elan Valley. This dam created a million gallon reservoir on the rocky slopes above Caban Coch which was used to provide a water supply fed by a pipeline to the navvies village below.

After the completion of the waterworks scheme, the Nant-y-Gro dam was no longer needed. The permanent stone-built Elan Village replaced it. The Nant-y-Gro dam, however, was still intact at the time of the war, so the government requested the use of the 35 feet high dam for secret experiments.

These were linked to the wartime military objective of breaching a series of large dams in the Ruhr Valley in Germany in order to disrupt armaments production in the industrial heartlands of the Ruhr below the dams.

A great deal of highly secret experimental work was being carried under the direction of Barnes Wallis. The Nant-y-Gro experiments were preceded by trials on scale models at government research stations near London, involving the detonation of scaled amounts of explosives at varying distances from the walls of the model dams.

In May 1942 the first live explosive tests on the dam itself were carried out in the Elan Valley, watched by Barnes Wallis. These first attempts were spectacular, but they did not seriously damage the Nant-y-Gro dam. This provided a valuable testbed for devising a practical means of breaching the huge Mohne, Eder and other masonry dams.

A further advantage of the use of the Elan Valley site was its remoteness, ideal for top secret trials without fear of being observed!

Read more on the Dambusters Experiments at Elan Village.

The so called 'bouncing bomb' was actually a revolving depth charge, to be suspended in a belt-driven cradle beneath a Lancaster bomber.

Resembling a large oil-drum, the bomb was to be set spinning in reverse before being dropped at a height of just 60 feet and at a very precise speed and position in front of the target dam.

The action of the device was to skip across the surface above the defensive netting until making contact with the face of the dam, and then roll down under the surface due to the spinning action of the mine. The depth charge was then intended to detonate underwater right beside the vertical dam wall.

The story of the Dambusters raid itself is well known, and the story here is mainly concerned with the Elan Valley connection. The last stage in the sequence of events, however, was that 19 specially equipped Lancaster bombers of 617 Squadron, RAF led by Wing Commander Guy Gibson took off from Scampton in Lincolnshire, England on the night of May 16th/17th, 1943 headed for the Ruhr Valley.

The mission was an exceptionally risky one because of the heavy underslung payload beneath the bombers and the need to approach the targets at a very low altitude, while exposed to heavy defensive ground fire. The Mohne and Eder dams were breached in the attacks, and the Sorpe dam was damaged.

Eight of the 19 aircraft failed to return, and 53 of 133 aircrew were killed in the operation. The outstanding bravery of those involved was recognised by the number of medals awarded, including the Victoria Cross presented to Guy Gibson.