As an avid animal rescue supporter having had 3 cats over the past 13 years (sadly 2 have passed away) – my wife and I in March decided to adopt a rabbit from LLysnini (RSPCA rehoming centre). The staff there are excellent and do a brilliant job – so we adopted Dora (who we have now renamed Saffy).

In August we decided that we would like to have a friend for Saffy, and went to Lllysnin again and looked at 2 different rabbits – one was an un-neutered male who was about 6 months old, and the other also an un-neutered male about 3 months old.
We took Saffy to socialise them, and the older one tried to mount our rabbit on numerous occasions and we then set about socialising the younger one – called Hobly.

We were advised that we got 4 weeks insurance with Petplan (and although I have never had pet insurance on any pet*) as it was free – we did not refuse this.
We must have gotten home at around 16.03 (as that is the first time stamped image we have on our mobile phone). 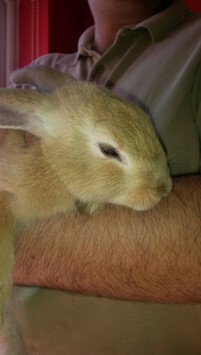 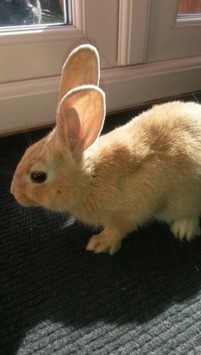 We introduced Bailey to Saffy, along with Barney our cat. 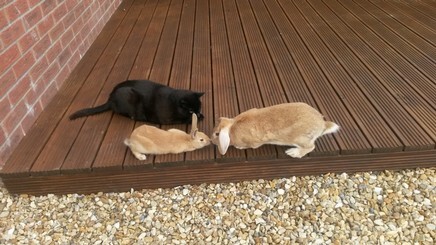 I then went upstairs to my PC – in order to log on and activate the free Pet Plan insurance (now I don’t want to appear that I know everything but my job is divided in 2 – one as the legal representative for 2 businesses, the other is the in house IT trouble-shooter – so I know about computers and forms (or at least I thought I did). 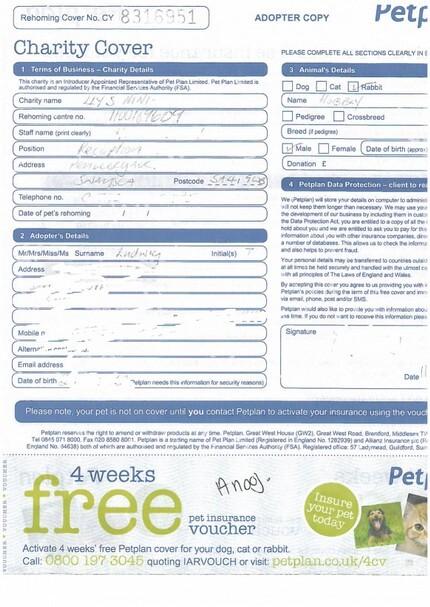 Logging in to the URL given http://www.petplan.co.uk/4cv it asks me for a 10 digit voucher code, now this is where I may appear daft – in the excitement of getting a new rabbit, I read the form and nothing strikes me as a voucher code all I can see is the word COVER – which is a commonly used word in insurance – but try as I might I enter this Rehoming Cover No – and the form does not get accepted.

Admittedly I could have press the No Voucher number but at the time, I was getting increasingly frustrated with my inability to enter the number.

Between accessing my computer and around 16.31 – I looked out of our upstairs window and saw my wife rather agitated in the garden, and being 3 floors up I could not make out what she was saying, so ran down and saw her in floods of tears saying that Saffy had whacked Bailey (by this time Bailey was in his outside metal run, so was separated from Saffy – who we think may have either stuck her paw in, or Bailey stuck his head out and was clobbered.

Needless to say, I asked my wife to call St James Vets, whose answering machine asked us to called their hospital – we advised them the situation and told us to come in straight away.

Now, here is the messy part – my belief is because the Insurance Document did not clearly state what number to enter (albeit it did say 10 digit number) – this is not clear unless you read all the letter and all the filled parts. Usually contract law shows anything legal as printed, however we needed a claim form – so while I went to find something to put Bailey in at 16.36 she called PetPlan and spoke to Anooj, and told him that we were unable to activate it online and he stated words to the effect of “don’t worry – you have had him from the RSPCA – so don’t need to activate the cover” essentially to me this means he is covered.
We got to the Vets at around 17.36 and were seen by a lovely lady who took Bailey and said he needed medication, treatment and an overnight stay – she asked how it happened and “to coin a phrase” I said literally 10 minutes after we got home, he got in a fight with our other rabbit.

Now – how those 10 minutes appear crucially important to the Insurance company.
Anyhow – when I got home from the vets at around 19.04 I then went online and after messing bout finally managed to suss out that the 10 digit reference number was actually the rehoming centre number that they wanted.

An email was received saying this was our cover note – although my belief following my wifes conversation with Anooj is that the rabbit was covered already.
On the  3rd September we receive a letter

which shows to completely different numbers to that on our rehoming centre cover number, we receive a letter indicating that

We then get another letter on

on the reverse of the letter

Having not heard from them since 09/09/13 we emailed them, on 21/10/13 as the information on their website, asks us to click for more information.

When you click it it does not tell you what extra information they actually require.

Still not getting a response from this email on 21/10/13 we emailed again on 23/10/13 and were advised that
“Thank you for your email, I'm sorry that your claim is taking longer than normal.  I'll investigate this with our Claims team tomorrow and give you an update tomorrow afternoon”

On the 24/10/13 we had an email “Thank you for your patience while we assess this claim.  I have contacted your vet for some clarification over some notes in the history for Hobly and they should be able to get back to me later today.  Unfortunately I'm not in the office until Monday but I'll be able to pick this up then and pass the information on to our Claims team”

I then called our vet on Wednesday as I needed to book an appointment for our cats booster injections along with Hoblys neutering, and thought whilst at it I would look to see if the claim had been sorted – their website indicates the claim is closed – so I emailed asking what that meant and had a phone call later on.

The outcome is that
(1) They are rejecting the claim on the basis that “if the accident happened 10 minutes after I got home” this would then mean that the accident occurred both before I attempted to activate the policy online and also before we spoke to the person on the phone.

My understanding and refuting of this is that
(1) I have photos to show that the rabbit is fine from at least 16.03 to 16.20 (with time stamps on a mobile)
(2) During this time an injury occurred when I was attempting to activate the policy on line and their form is ambiguous and misleading to say the least, and therefore acceptance should be given that I was attempting to activate the policy.
(3) We were verbally advised (and I have been told that he should not have said this) that the policy did not need to be activated and was in force from the moment we got the rabbit.
(4) If the rabbit was injured 10 minutes after I got home, this would have been at 16.10 meaning I waited over an hour to get to the vets which in some way would mean I was cruel to my animal.
(5) It was the Vets that advised the Insurance policy, that I had advise them the rabbit was injured 10 minutes after I got him, yet the Insurance company are unable to advise what time the appointment was made, in order to ascertain when the 10 minutes was – which to coin a phrase could have been any length of time – as I did not check my watch when the injury occurred.
(6) I believe the insurance company are refusing to pay out on the basis that after my 4 weeks of free insurance finished, I did not take out a full policy – the monthly cost far exceeded what even a re-occurring fight per year would have cost.
(7) Their customer service is rather shoddy – if someone tells you something and you take their name, and they know that it was said – the fact that it is wrong is irrelevant, besides which if I needed to activate it – why did Anooj not activate it when I was on the phone.

If the Rspca are making alternative suggests what hope is there – I also note next week that Watchdog are discussing the high price of pet insurance.
M!chael Ludwig