We would like to say a huge thank you to Martin Gover and all those at Craig y Nos Castle who donated such a generous holiday to the auction over at https://www.facebook.com/groups/tarag/ 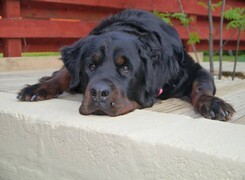 The auction was held for ‘Fife Rottweiler Rescue’ run by Gail Green and the holiday itself raised a massive amount... £550 that is an amazing amount for rescue.... if all the wonderful people at Craig y Nos Castle had not donated this amazing holiday and the bidders hadn’t bid with fighting spirit the following could not have happened and that doesn’t bare thinking about!

The money from the holiday has covered a £300 vet bill that the rescue would of had to painstakingly raise for the wonderful Brandy’s operation. Fife rescue were all extremely worried about their Brandy; who needed a long operation

Brandy came into their care some 4 years ago after being a stray at the grand old age of 8 yrs according to her microchip! 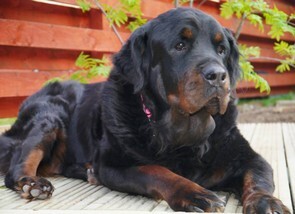 She was not in very good condition and was covered in lumps and bumps and quite lame on one of her back legs.

They made the decision not to rehome her but to find her a long term foster home where fife remained liable for all her costs. Brandy has thrived in her foster home, has had some of her lumps removed, she attends hydrotherapy which has helped her legs, she has had eye problems which she attends the eye specialist for and suffers from partial laryngeal paralysis.

For the last few months Brandy has been attending the Vets due to having some internal polyps. Our vets bless them have tried treating her medically rather than having her undergo surgery but unfortunately none of the treatments have worked and sadly Brandy needs to have them removed surgically. The operation itself will probably take around 2 hours to do and because of Brandy's age they were extremely worried about her.

The money has covered the £300 bill and Brandy had her operation on 28th April and is out of surgery and recovering. The rest of the funds will help the other abandoned rotties in Fifes care!

Thank you Craig y Nos Castle http://www.selfcateringholidaycottageinwales.com for making this happen, to Sam Fairgrieves for bidding and winning the bidding war and to all those that took part. Thank you to all the volunteer admins at www.tarag.co.uk for running the auction and to ‘Fife Rottweiler Rescue’ for all your dedication and hard work in saving lives.
12yr old Brandy would like to thank everyone involved and especially all at ‘Craig y Nos Castle’